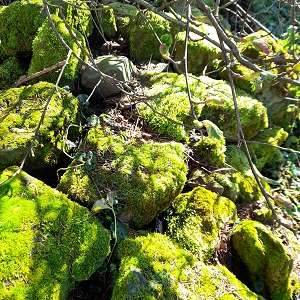 Recently was World Wildlife Day. And today I want to tell you why I don’t give up and don’t chuck it all in. Impressive photos from all over the world were sprouting up on social media with the wildlife we know from nature documentaries: wild lions and tigers, an elephant family, brightly coloured birds from faraway countries with names we’ve never heard. Butterflies I haven’t seen for years and finally an ancient tree, a tiny mushroom. Someone wrote: „What a pity, I have to travel for something like this, I live in the city, there is no wildlife.“ Is that true?

Maybe you’ve heard that in a metropolis like Berlin, there are packs of wild boars or foxes running through the streets? In New York City, you might not only encounter chipmunks, grey squirrels, or bats, you might even run into a coyote. Hardly anyone knows that New York is one of the greenest cities in the world. Nature is conquering human-made spaces worldwide. Peregrine falcons, as cultural successors, now use skyscrapers or bridges as breeding sides, because their natural habitat in cities is mostly lost. But you don’t have to walk far. Open your front door, go outside! If no one there has scared everything away with a cleaning mania or leaf blower, the chance of finding wildlife is quite high.

Sometimes it is so tiny and hidden that you need a magnifying glass. These beautiful violet oil beetles f. e. love dry and sunny places where they can run over the floor and hide under leaves or a piece of bark. Adult beetles eat pollen, so there must be flowers. The specimen in my photo lived in our parking place, warm concrete paving stones with wide cracks in which moss and small weeds grow. They did not have far to go to a sown bee pasture. There was plenty of pollen and these beetles can find also bees to parasitise.

Wildlife starts tiny. This includes the ant at your sitting place as well as the tardigrade hiding in the moss next to a rain barrel. Or take only one handful of soil! Scientists in New Zealand have counted the life in a handful of soil: there can be 500 different species of fungi building 50 km of fungal mycelium. This infinitesimally small part of Mother Earth is home to 10,000 species of microorganisms if the soil is healthy, and up to 100 billion different bacteria! If living beings were able to seize world domination solely based on their numerical distribution, they would not be human beings at all.

World Wildlife Day is not just a day for celebration alone. We live in a time when man-made climate crisis and species extinction threaten all life on this earth. A sterile, dead soil would mean the end of humanity because agriculture would no longer be possible. And yet we treat our soils as if they were interchangeable and endless. The United Nations write:

„The Day reminds us of the urgent need to step up the fight against wildlife crime and human-induced reduction of species, which have wide-ranging economic, environmental and social impacts.“

But how are we supposed to cope with these immense problems when they already affect such tiny creatures? While caressing a stone with its mossy hair, I thought this is the problem of our time. Am I not fooling myself with my delight in miniature worlds? Out there in the world, the huge, immense, overwhelming, unspeakable is happening, a threat from all sides. Even professional activists often feel helpless in the face of all the challenges.

A new word emerged in social media: doomscrolling. It has an effect similar to gaffers at an accident. Like in a maelstrom, some people surf and zap from one bad news to another. We have been conditioned to this because in journalism it was said not only ironically for a long time: „Only bad news is good news“. „Good“ namely as a quota earner. It sells better.

In this way, many users move from war to the extinction of species, from the climate crisis to the pandemic. An overflow develops, the situation seems hopeless. A new problem arises: people who believe in apocalypse narratives believe in total destruction. Some even celebrate it sarcastically. Some do not notice that the perverse desire for an apocalypse has fascist features. What falls by the wayside are hopes, which in turn nourish solutions. Should we really chuck it all in and give up? Shouldn’t these tiny worlds of mosses and lichen better live without humankind? What a way of thinking! The fossil records of moss and lichen are poor, but we know that these living beings are very much older than humankind. Nevertheless, they developed with us, changed their biotopes even with modern people. Lichen grows on concrete and mosses survive on our house roofs, if we don’t kill them. What can they teach us?

Listening To A Sandstone

I am crazy about stones. I collect stones, my first name means „rock“, I caress stones and remember stories they tell. The Vosges sandstones in my garden remind me that I saved a demolished dry stone wall from the rubble dump. They talk about the mountains where they normally live. Stop! Wait! Did I write about stones that they talk?

We learned at school that animals, plants and fungi are alive, but that stones are simply dead matter. Even in fantasy novels, they very rarely act as living beings – at best, we know such a view from indigenous people or from ancient myths. Geologically, these rocks of the Vosges mountains mostly consists of Triassic and Permian red sandstone. That’s crazily old. These stones have existed on our planet for more than 250,000 million years. It took two major extinction events and about another 50 million years until the famous Jurassic with dinosaurs!

The Buntsandstein sandstones are predominantly feldspathic sandstones, often characterised by pores filled or partially filled (with clays (R3 illite–smectite), dolomite, siderite, and barite) as a consequence of diagenesis, tectonics, and the circulation of hydrothermal fluids.

Nothing that can speak, nothing that I could learn something from. No life: Chemical ingredients in a special mixture, nothing more. But am I not also a conglomerate of chemical ingredients? Thoughtfully, I sat down on one of the steps and touched a small loose stone with my hand. It tumbled down into the grass and exposed a bare spot. It was anything but bare! Woodlice had curled up together. In one place, tunnels of ants led into the earth. I saw a worm-like animal with many legs and something jumped off that I would have needed a magnifying glass for. There I had this tiny world again, a community of animals living together, but also bacteria that only occurred here in this combination because a sandstone provided a special microclimate.

I quickly wanted to put the stone back in place and turned it in my hand to find the right direction. Then I noticed that it was also alive on the stone. The side with which it had covered the earth felt cold and damp. On the sun-warmed surface lived completely different mosses than on its sides. In its poors, between this miniature jungle and tiny lichens, life scurried and swarmed on it. What if we were all right, just from a different perspective? The geologists with their description, the biologists with their attention to the biotope and me with my „telling“ rock?

Biotope – a key word. We have learned to see individual parts and neglect their interaction. We think „stone“, but no longer in systems. But it is precisely this stone that influences the system of life with its mere presence and texture – whether I put it back in its place, or whether I abandon it in a big city or a desert. For me, such a stone lives because beings live on it and the stone itself enables or prevents life. The very moment, when I understand it as a system, as part of a biotope or an ecological niche, it even becomes an acting part of this system. Without these sandstones, my garden would be completely different. If they were distributed differently, I would have different flora and fauna.

My perspective shifts completely. If there are ecological problems, I no longer look at an individual part as if I had spare parts available. I observe the coexistence of life and can conclude how nature helps itself and how I can support nature. The natural mechanic rightly shrinks to a teeny tiny part of nature called Homo sapiens.

This view gives me an idea: What if our enumeration of so many individual life-threatening problems and catastrophes were also just the view of an egocentric mechanic who believes he only has to screw around in the right places and individual parts would be replaceable? Isn’t that the anthropocentric view that distances us so much from other life on earth? What would happen in our thinking if we changed the perspective to the system behind it?

Therefore we have wars, climate crisis, mass extinction, exploiting abuse and this crazy deepening gap between rich and poor. We can stop doomscrolling right now.

Of course, there will be individual solutions and specialists will be needed. But if we finally tackle the causes courageously, we will create a counterweight to our wrong way of thinking, which almost causes the entire system to topple. That humanity is capable of such paradigm shifts has been proven time and again in history. This time we could choose life, cooperation, sharing and symbiosis instead of our destructive lust for domination, which is nothing other than a religion of death.

Did you like this article? I would be very happy if you recommend/share the links to my podcast and the blog. To make sure you don’t miss anything, just subscribe to my free newsletter. You find the newsletter and our community that supports me in my complex work here: